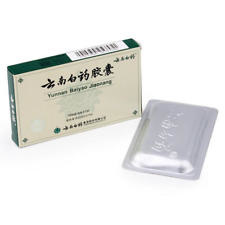 Yunnan Baiyo should be an essential part of any first aid kit, Western and or Eastern. Originally part of every Chinese Soldiers first aid kit, and later used extensively on the battlefields of Vietnam, Yunnan Baiyo has so many incredible first aid applications it is hard to believe it is so cheap to purchase.

Yunnan Baiyao was invented in 1902 by Dr. Qu Huan Zhang in Yunnan Province. Yuannan Baiyao is the best all around formula to stop traumatic bleeding and prevent infection. It is a must for your medicine cabinet or first aid kit. The ingredients that make up Yunnan Baiyao were a secret, kept by only one family of doctors. The communist government forced the family to give up the formula and it became the property of the state, which made it available cheaply and in variety of forms. Yunnan Baiyao became famous because it was an important part of battlefield medicine when the Chinese fought against the Japanese in World War II. Yunnan Baiyao was part of China’s aid to Vietnam during the Vietnam War, due to its effectiveness in treating battlefield injuries.

Yunnan Baiyao both stops bleeding and removes blood stasis. In clinical studies, Yunnan Baiyao is shown to speed up  clotting  and reduce inflammatory response. In Chinese medicine it is said to dispel  blood stasis  and to stop bleeding, while also reducing swelling.  dispel blood stasis and helping blood to clot are seemingly contradictory actions. Yet these two actions are what makes Yunnan Baiyao so suitable for healing wounds. As the bleeding stops, blood congeals in the wound. This congealed blood sometimes blocks normal circulation and prevents the wound from healing properly. Yunnan Baiyao stops the bleeding but simultaneously encourages normal circulation, removing pus and congealed blood, which can prevent the flesh from being properly nourished. This helps the flesh to regenerate with minimal scarring.

The exact ingredients and production process for making Yunnan Baiyao are a state secret. It is thought that one of the primary herbs in the powder is San Qi, also known as Tien Chi, Pseudoginseng and Notoginseng. Yunnan Baiyao imported into the USA lists the following ingredients. 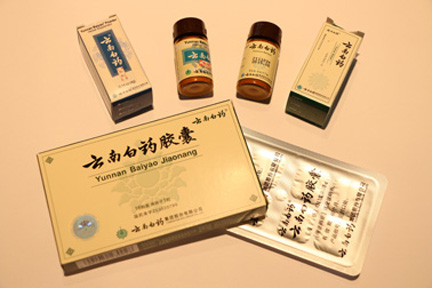 Yunnan Baiyao, when used as directed has few side effects. It should not be taken long term as it is for bleeding a trauma. Do not use it to regulate menses except short term, because extended use can interfere with the production of new blood.

Yunnan Baiyao can be taken internally if there is suspicion of internal hemorrhage or to prevent and stop infection. In these cases a cap-full of powder or 2-3 capsules can be taken with warm water twice a day. This can be useful for head injuries where there may be bruising or bleeding of the brain.   In these cases it is very important to stop any bleeding that may be occurring while preventing the formation of blood clots that may cause problems later. In instances where there is suspicion of concussion or internal bleeding, take Yunnan Baiyao and go to the hospital immediately.

For bruises and contusions, sprains and strains, where there is no hemorrhage or concussion, Yunnan Baiyao is taken with alcohol (vodka or rice wine). In Chinese sports medicine alcohol is said to “course the channels” by dilating the blood vessels and pushing energy through the meridians. This accentuates Yunnan Baiyao’s property of dispersing stagnant blood. In cases of hemorrhage or concussion, Yunnan Baiyao should not be taken with alcohol.

In cases of open wound or infection, Yunnan Baiayo is very effective when applied directly to the wound. If the wound is bleeding sprinkle the powder into the wound and use the standard First Aid procedures of direct pressure and elevation of the injured area to stop the bleeding. One of the few times when ice is useful is with wounds where the bleeding won’t stop. This is not uncommon with head wounds. When my son’s skateboard hit his nose and cut the side of it deeply, local swelling kept the blood from congealing. I daubed Yunnan Baiyao on the cut and used direct pressure and ice to stop the bleeding. Then we cleaned the cut, and applied a paste made from Yunnan Baiyao under a band-aid. The cut healed quickly with no scar.

Once bleeding is stopped, clean or irrigate the wound and then make a paste with your own saliva and pack the paste over and around the wound. Although water can be used to make the paste, your own saliva contains enzymes which kill bacteria. Finally, cover the wound with a clean bandage. Reapply the Yunnan Baiyao twice daily until the wound closes. In cases of suppurating wounds it is better to just sprinkle the powder over the area rather than making a paste, because the wound must dry out in order to heal. A friend of mine had a growth removed from her groin area. Even after two weeks and antibiotics, there was a round open wound with angry red edges oozing pus. Initially I had her clean the wound, sprinkle Yunnan Baiyao powder over the area and cover it with a bandage twice a day. When the wound dried out and started to heal, she made a paste of saliva and powder and applied it twice daily for several weeks. The wound gradually filled in with minimal scarring.

Yunnan Baiyao can be applied as a paste for many kinds of open and infected wounds including ingrown toenails that have become infected. I have used it with spider bites where the flesh was beginning to die from necrosis. Simultaneous internal and external use of Yunnan Baiyao helped the flesh to regenerate. Often with ingrown toenails or fresh spider or centipede bites it is useful to first apply a paste of water and the green clay used for facials. Leave the clay on for several hours. It will draw the toxins and pus from the area. Then clean the area and apply the Yunnan Baiyao paste.

The red pill that accompanies each blister pack of capsules and each vial of powder is be taken only for serious injuries such as gunshot wounds and stab wounds. I cannot say I have used this, but martial arts practitioners have reported using the red pill and the powder to heal these kinds of wound without recourse to antibiotics. I am not recommending that you treat gunshot wounds or stab wounds yourself, but having access to emergency medicine that could save your life is always useful. Two interesting uses of the red pill is it use in obstetric clinics in remote areas to stop severe uterine bleeding after giving birth. The pill is taken and the powder is applied locally to the vagina. Another use involved  several cases of unstoppable post-operative internal bleeding in which the red pill was powdered and introduced intravenously. 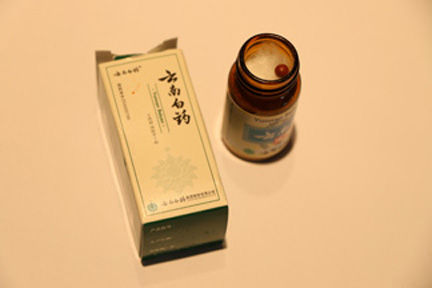 Yunnan Baiyao can also be a useful tool in post-surgical healing. Even the less invasive orthoscopic surgical procedures used so widely today, create trauma inside the body that is slow to heal, despite the small scars on the surface. The dual actions of Yunnan Baiyao – stopping bleeding and dispersing stagnant blood make it ideal for both pre and post surgical use. Doctors in China have patients take Yunnan Baiyao 2-3 days before surgery because studies have shown that Yunnan Baiyao can reduce the amount of bleeding during operation. When applied after an operation, Yunnan Baiyao may promote healing from the wound. After surgery, take two capsules, two times a day for a week. One of my patients was undergoing a hip replacement. She took Yunnan Baiyao for a week after the surgery followed by several weeks of herbs to move stagnant blood and increase blood circulation to her legs. She also received acupuncture and massage around the hip area and later over the scar. Within days, she was walking well and her healing process was quick and uncomplicated.

Duration of Treatment with Yunnan Baiyao

In many cases, Yunnan Baiyao is used for only 2–4 days; however, sometimes it is taken longer. In general, Yunnan Baiyao is not intended to be used regularly for more than about 15 days, especially when taken internally. Remember prolonged use can interfere with the production of healthy new blood.

Other Uses of Yunnan Baiyao [1] 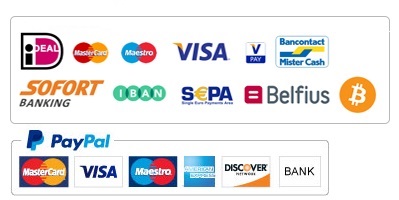